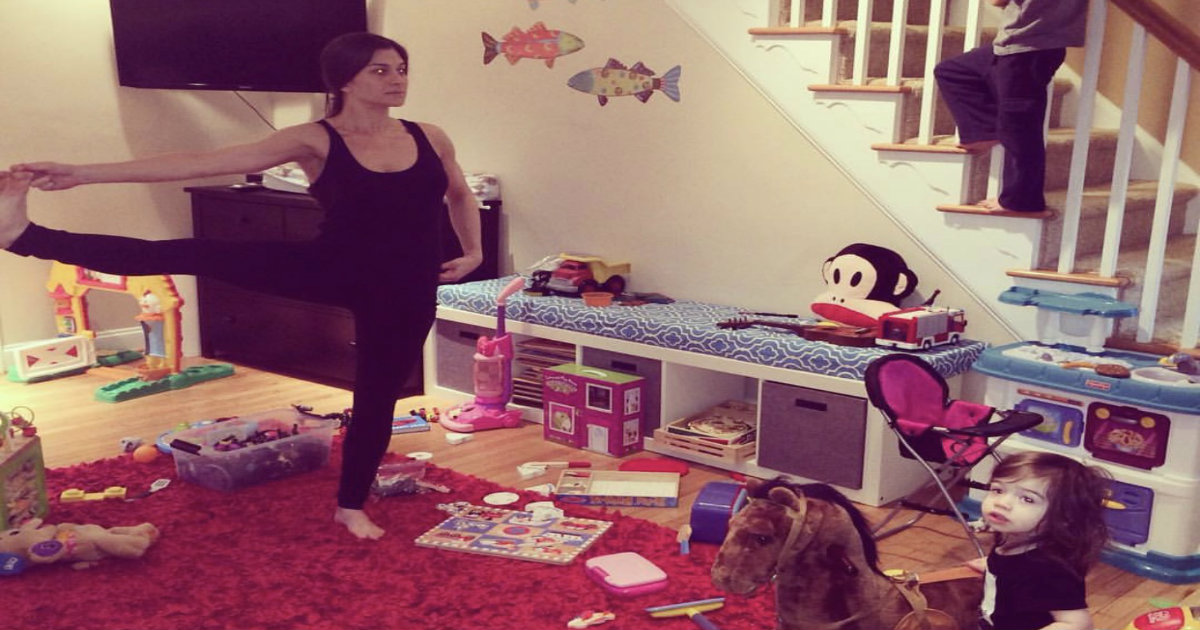 “This life is a gift.” – an inspirational thought from my tea bag.

I first found my way onto a yoga mat during a very discontented time. In an odd way, I felt like I was trapped in someone else’s life and had no idea how to get back to my own. I felt lost. I felt unhappy. I felt grouchy. While I think I would have told you that I believed life was a gift, I decidedly did not feel that MY life was a gift.

It took a surprising amount of time for me to realize that I wasn’t happy. In fact, what I first recognized was my omnipresent grumpiness. I was losing my temper regularly and I hated it. I felt like I was going to bed most nights disappointed with myself (again) for raising my voice at someone. It seemed like I made the same promise to myself each morning: I will not lose my temper today. In fact, it was starting to seem like a mantra that simply wasn’t working.

Perhaps it was the chronic haze of exhaustion caused by being a stay-at-home mom of three, one of whom simply did not ever sleep, but it took an eternity for me to understand that my grouchiness was a symptom of a greater problem: I wasn’t happy.

The search for happiness

With that realization, I set about trying to change my life so that I could be happy again. Yoga was meant to be a way to take care of a tiny, mostly insignificant source of unhappiness: my post-third-baby-in-four-years body. I figured getting back to feeling more like myself physically (a.k.a. fitting into my “skinny” jeans) would be as good a place as any to start my search for happiness.

Way before I could zip up those jeans, however, I noticed I was leaving my weekly yoga class feeling something pretty close to happy. I also noticed that I’d walk in my back door and, before I could pay the babysitter, would be snarling all over again at a temper-tantrum-throwing-toddler, or the puppy who was chewing a book, or the simple fact that I knew the process of making three lunches was going to ruin my yoga glow.

I’m happy to report that it didn’t take an eternity for me to wonder why I felt so happy after practicing yoga and if it was possible to hold onto that feeling for longer than my seven minute drive home from the studio. In fact, I think I piled all three kids into the car for a trip to the bookstore to buy my first stack of yoga books within a month of my first class.

Somehow, with no clue that it even existed, I found the answer to all of my questions, the antidote to my grouchiness, and my way back to happiness in those books. I found yoga philosophy.

You can imagine me sitting in a beach chair in my backyard, surrounded by the mayhem of three little ones and a puppy, with my nose in a book reading about “living your yoga practice.” While I wasn’t at all clear about what that meant, if it meant that I could feel the way I did during and immediately after practicing yoga, I wanted to do it. I wanted it more than I’d ever wanted anything including my husband and children.

I discovered that the yoga I was doing on my mat on Monday mornings was actually the third limb of eight. Limb four was all about breathing exercises for which I would clearly need a teacher. Limbs five through eight were all about meditation, which I obviously (ha!) didn’t have the time or quiet surroundings to do. The first two limbs, however, looked promising. They consisted of principles called the yamas and niyamas. These were five commitments we make to living a certain way and five practices we embrace to support us as we do so.

Being a rather orderly human (and not understanding that yoga doesn’t care one whit if it is done “in order,” just that you’re practicing somehow and some way), I felt compelled to go back and start from the beginning with my yoga practice and began to work with these ideas:

I read. I journaled. I practiced. I noticed when I slipped away from one of these ten principles and I tried not to get overly judge-y with myself. I noticed when I held one close and how effective it was and I tried not to assume I’d get it right the next time, too. I had good days. And I had days I messed up big time. I saw growth. And I saw backsliding. But just as I kept showing up to yoga class on Monday mornings (and Fridays, too, by this point), I kept at it. For a really long time.

Coming back to myself

Slowly, but surely, I was beginning to feel like me again. I will confess to a period during that first year when I was in a full blown panic. I’d gotten it into my head that in order to really embrace this practice, I needed freedom to retreat. To go to a far-away ashram to study. To hit the “do over” button on my life. As exciting as the prospect of a do-over felt, it also felt crushing. As much as I wanted a different life, I didn’t want to give up my current one.

Then one day, sitting in my beach chair again, this time in my driveway while the kids played with sidewalk chalk (which was infuriating because two of them were throwing it over the fence rather than drawing with it), I had an epiphany. I was being called to live my yoga RIGHT HERE, RIGHT NOW. This crazy, messy life was my metaphorical mat. My real-life challenging postures were these lovely little people who were simultaneously driving me batty and overwhelming me with love.

Appreciating that life is a gift

Because of my practice with yoga philosophy, I had at last caught up with my tea bag. I understood that THIS life (my life!) is a gift. In that instant, something inside of me softened and shifted. I stopped fighting. I stopped looking for an exit. I opened myself fully to my life and received it.

I discovered I was content. My life felt like mine. Nothing had changed. And everything had changed. To paraphrase from TS Eliot’s poem Little Gidding, I had not ceased my exploration. And the end of all my exploring was to arrive where I started and know the place for the first time. Fifteen years later it is still happening every single day.

In the last ten years, I have watched students explore yoga’s philosophy over and over again. I am awed at how it reaches out and touches everyone who comes to it with an open, curious, seeking heart. I have seen it inspire and support huge life changes a few times. Mostly, however, I have witnessed it create the same quiet, subtle-yet-seismic shift in students that it caused in me. It is a way to discover an abiding contentment and a deep love for your life as it is.

That, my friends, is a gift for which I will always remain profoundly grateful.

Sharing the gifts of yoga philosophy

If it hasn’t already, you can trust that yoga philosophy is waiting to share its gifts with you as well. If you’re ready to start exploring, I’ve created an online yoga philosophy master class to get you started. Stay tuned – it launches soon!