You are here: Home » Blog » Choose to Create Connection No Matter the Circumstances 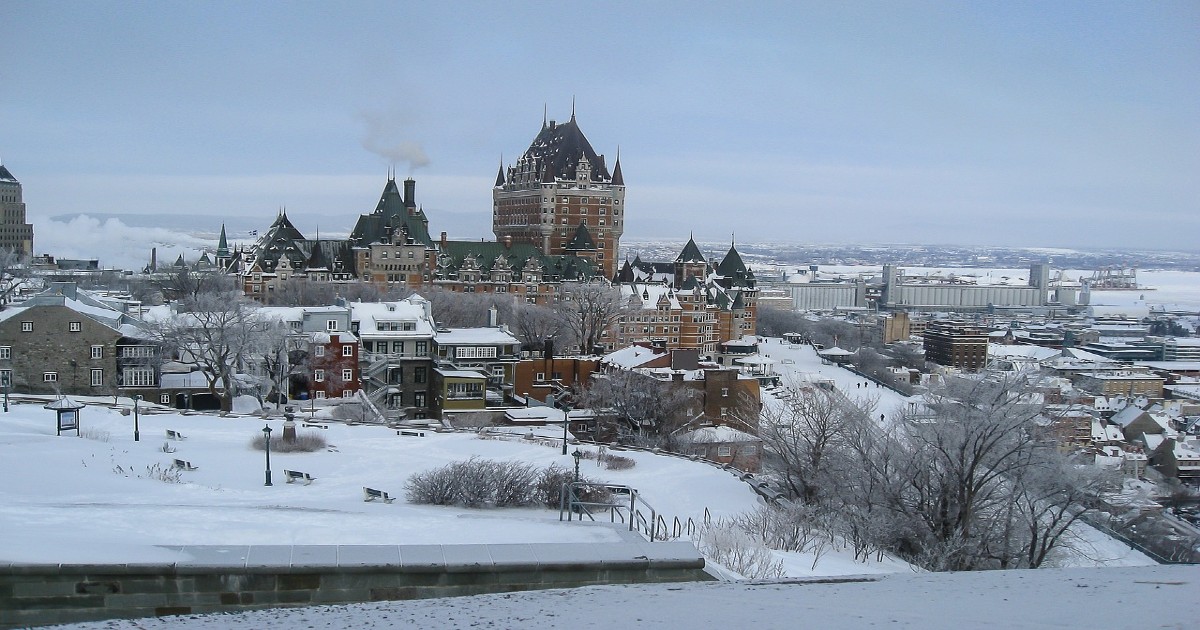 Yoga: the word yoga comes from the Sanskrit root yuj, which means to join, to unite or to connect.

Yoga: according to Patanjali, author of 2500+ year-old seminal yoga text, The Yoga Sutras, yoga is a practice designed for the cessation of the fluctuations of the mind.

Bear with me for a tale of turbulent travel.

My husband and I traveled to Quebec City a week ago. We awoke to a message from the airline that our connecting flight from Montreal to Quebec City had been cancelled due to a massive storm that was dropping two feet of snow on northeastern Canada. They had booked us on a flight on Sunday, which clearly would not get us there in time to spend the weekend.

Because we had checked into our flight the day before, there was nothing our American Express Travel advisor could do to help us find a new way to reach our destination. Her advice was to get to Montreal and “sort it out from there.”

Being fully committed to our Canadian adventure, which involved Quebec City’s week-long winter Carnaval as well as exploring the city itself, we decided to take her somewhat vague advice. We landed in Montreal right on time in the middle of what could only be described as a blizzard. All local flights for the rest of the day had been canceled.

We patted ourselves on the back for brilliantly going online to book train tickets from Montreal to Quebec City that evening, acquiesced to Mother Nature, and settled in to spend the day in the airport.

My husband got back on the phone to close the loop with American Express Travel. After waiting while the agent was on hold with the airline for over two hours, he was informed that if we did not show up for our Sunday flight to Quebec City, our flights home on Monday would be automatically cancelled. Her only advice, “find a real-live Air Canada human.”

We put down our beers, paid for our lunch and headed upstairs to find someone in ticketing. An airline agent pointed to a massive line snaking along most of the length of the terminal and suddenly we realized that we no longer had enough time to sort our problem and still make our way to Quebec City.

When all seemed lost, help appears in the form of one kind person with one powerful question – “How can I help you?”

After about a half hour in line, during which time we hardly moved while the line nearly doubled in length behind us, a strikingly beautiful woman in an Air Canada uniform tapped me on the shoulder. “How can I help you?”

I told her briefly of our predicament. She smiled and said, “That’s easy! Follow me!” She took us across the way to the check-in counters, turned on a computer, and cheerfully did what she needed to do to cancel our Sunday connection and then double-checked to make sure our return flight was still in the system.

As we thanked her profusely (resisting the urge to leap across the counter to hug her), I asked her why she’d chosen us from the hundreds of people in line. Her still-smiling reply? “I really like your pink sweater.”

Why am I telling you this travel tale? Because, whether she knew it or not, this woman was practicing yoga. In the middle of a workday that could only have been filled with problems, complaints and calamity, she had serenely chosen to create connection.

In doing so, she not only lived into yoga’s literal definition (to join, to create union, to connect) by picking me from the crowd and joining me in my circumstance, but she also fulfilled yoga’s highest purpose (to calm or still the fluctuations of the mind) at two levels – her own and mine.

She had clearly already chosen not to let the issues of the day change her mood or her mindset or even her immaculate appearance (body, mind and spirit). She was cheerful and calm while surrounded by anxious travelers. She was kind, when it seemed likely that some of the grumpy customers around us had not been kind to her. She was poised, polished and even peaceful in the midst of chaos.

Living your yoga is contagious.

By connecting with us, she shared her equanimity. While we (oddly, perhaps, or perhaps it was because of all the yoga we do) hadn’t been overly rattled by our predicament, connecting with this woman left us feeling positively fortunate. Her serenity became ours. As did her smile and her “What can I do for you?” approach to others.

Thanks to one ebullient airline professional, we had the peace of mind to calmly navigate through drifts of snow to the shuttle bus to the train station. To wait patiently when our “on time” train didn’t materialize for nearly an hour. To take a deep breath (or 100) when the ticket-taker announced that we would be traveling quite slowly to Quebec City, extending our travel time another two hours.

Upon arriving at last in Quebec City, we cleverly booked an Uber rather than join the crowd in the taxi line. When a woman saw my husband had the Uber app open, she told him she’d been unable to connect with a car. Without hesitation, we passed along the “What can I do for you?” gift that had been given to us earlier that day and happily shared our Uber.

You absolutely, positively have the power to change the world.

If you ever think you can’t make a difference in this messy, grumpy, sometimes mean world, think again. Take it from me, on even the worst of days, your choice to connect in kindness and concern for someone else will create ripples of goodness that will touch people you haven’t even met – perhaps even hundreds of miles away.

If you’re curious about how to take your yoga practice off your mat and into your life, Yoga With Spirit is the place for you. Browse the essays in this blog. Or check out our online Yoga Philosophy class. Better yet, join our community. We’d love to get to know you!